Anglers fishing with me on my Action Craft flats skiff the Snook Fin-Addict, out of CB’s Saltwater Outfitters on Siesta Key, caught and released trout and pompano in Sarasota Bay on flies, CAL jigs with shad tails and DOA Shrimp, snook at night in the ICW near Venice on flies and trout and redfish in Gasparilla Sound near Boca Grande on CAL jigs with shad tails during the past week. 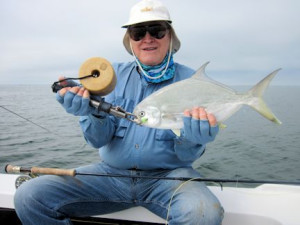 Anna Maria Island winter resident, Bill Morrison and Sarasota winter resident, Gary Marple, fished Sarasota Bay with me on Monday. We fished deep grass flats on both sides of the bay where they caught and released trout and a nice pompano on Ultra Hair Clouser flies.

Keith McClintock, from Lake Forest, IL, and Ron Shay, from VA, fished Gasparilla Sound near Boca Grande with me on Tuesday. Sea fog rolled in on us early in the day and made it a cool, damp day despite a forecast for sunny and warmer. However, they had good action with trout to 18” and a red on CAL jigs with shad tails.

Sarasota winter resident, Mike Perez, snook fished with me on Wednesday night. We fished lighted docks in the ICW near Venice and he caught and released 8 or 10 snook on my Grassett Snook Minnow fly. Without much tidal flow due to an outgoing tide being negated by a strong wind blowing the opposite direction, snook were being very picky. Mike finessed them into eating by dead drifting his fly deep in the water column. There aren’t many places where the wind blows 20-mph in dense fog!

Tom Lamb, from Geneva, Switzerland, fished Sarasota Bay with me on Thursday afternoon. We fished deep grass flats on both sides of the bay and caught and released a few trout on CAL jigs with shad tails, DOA Shrimp and DOA Deadly Combos. 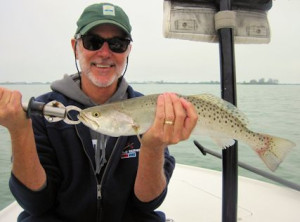 Ron Shay, from VA, with a nice trout caught on a CAL jig with a shad tail while fishing Gasparilla Sound near Boca Grande with Capt. Rick Grassett. 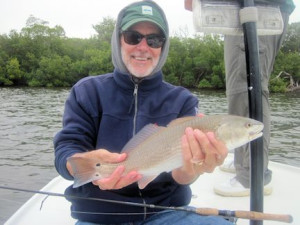 Ron Shay, from VA, with a red caught and released on a CAL jig with a shad tail while fishing Gasparilla Sound near Boca Grande with Capt. Rick Grassett.

I was a seminar presenter at the News Channel 8 Tampa Outdoors Expo & Boat Show (formerly the Frank Sergeant Outdoors Expo) at the Florida State Fairgrounds on Friday and Saturday. Billed as the largest outdoor and boat show in Florida, the show draws big crowds every day. Almost 50 seminars on everything from fresh and saltwater fishing, fly fishing, boating, kayaking, hunting, dog training and more were given by top outdoor experts. I gave presentations on “Saltwater Fly Fishing”, which covered saltwater fly fishing tactics, fly tackle rigging and fly selection and spent some time with my friends at DOA Fishing Lures in their booth.

There are still some spots available in CB’s Saltwater Outfitters Orvis-Endorsed Fly Fishing School next Saturday, Mar 7th. I will be the instructor for the school which will cover fly casting basics, line control, shooting line and the roll cast. The course, designed for beginning and intermediate fly casters, will focus on basics but also work with intermediate casters on correcting faults and improving casting skills. Leader construction, fly selection and saltwater fly fishing techniques will also be covered. Cost for the school, which will run from 8:30 AM to 3 PM, is $150 per person and includes the use of Orvis fly tackle, a text book and lunch. Contact CB’s Saltwater Outfitters at (941) 349-4400 or info@cbsoutfitters.com to make reservations.

Snook season reopens on the west coast of Florida on Mar 1, although many snook will be under the 28”-33” slot so handle them gently and release them quickly. Full regulations can be viewed at www.myfwc.com .You may find trout, blues, pompano or flounder in channels, troughs, basins or edges of flats, particularly when the tide is low. Look for reds and big trout mixed with mullet schools on shallow flats and edges of bars. Afternoons may fish better than mornings when water is cooler.